What's this? A new post on that one blog by that weird dude with a rusty Falcon? Yep, today's your lucky day, unless you were hoping to hear about the Falcon. Grace is still sitting neglected and increasingly dusty in the garage. But that doesn't mean I haven't been in the garage...

I have been in the garage quite a bit, and it's all been bike stuff. The nice thing about California, the only nice thing about California, is that you can mountain bike all year round. I kid, I kid, there are a lot of nice things here, but all the amazing restaurants, orange trees, and beaches do kinda get cancelled out by the cost of living, rats in my attic, and Gavin Newsom. But like I said a couple posts back, I've been riding bikes a lot, and sometimes my three year old likes to go ride his "mountain bike".  It's cute as heck and I love it.

He was starting to outgrow his 12" wheeled strider, so I got it in my head that I wanted to build a "mountain balance bike" for him. There were a few specs that were important to me. First, it needed to have 14" wheels. These are kinda rare, but they were the right size for him. Like I said, he has pretty well outgrown 12" wheels and 16" is just too big a jump. And second, it needed to have a hand brake. The one problem we've had with his "mountain bike" is that it doesn't have brakes, and dragging the feet has a limit to how much braking that can provide. I looked around a lot and the only bike I found that met these criteria was the Commencal Ramones 14" push bike, and it looks awesome. It's also $319 without the brake kit, which I think adds $70 or so. $400 seems a bit absurd to spend on a kids push bike, and I figured I could do better. Could I? I guess that's why you're gonna read to the end. 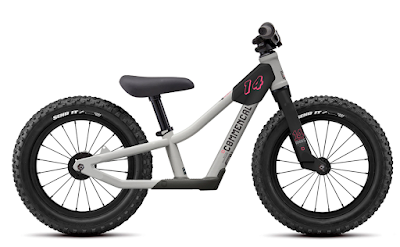 So the first thing I did was compare his 12" bike to the 14" convertible balance/pedal bike we had bought on Facebook Marketplace, but he never really liked riding. The geometry didn't suit him well, and when he rode it as a balance bike he often ran the frame into his calf, resulting in minor scrapes and little fits of rage. Wait no, the first thing I did was impulsively go out and buy an old steel bike frame and couple steel forks from some tweeker on Marketplace, then I compared his bike frames. I drew them up in CAD to create a geometry loosely based on those two bikes, with some elements of actual mountain bike design sprinkled in.

With a plan drawn up, I started hacking away. My first victim was the fork. I had two forks, one a road bike fork with a 1 1/8" threadless steerer tube, and the other was a rigid mountain fork with a 1" threaded steerer tube. I didn't want to mess around with a threaded stem as I have an irrational dislike for them, so whirr went the bandsaw and off came the steerer tube. Luckily the inside diameter of the 1 1/8" steerer tube was almost exactly the outside diameter of the 1" steerer tube, so I was able to slide slide them together and weld it up. I also shortened the fork legs and welded on some dropouts to mount the front wheel (though these were replaced later with a different design dropout).

With the fork sorta sorted, it was time to really start chopping. Hopefully this old frame wasn't something special, because my bandsaw did a number on it. Right around this time in then project I accidentally brought home a 3D printer, and that turned out to be very useful. I found some guy named Chris Killer on Facebook Marketplace (who turned out to not be a killer, just an Englishman which is almost as bad) to do some machining on the new head tube and he offhand asked if I wanted to buy his 3D printer for $100. So yeah, I accidentally brought home a 3D printer, and right away, I started printing parts to help align the frame for fit up and welding.

Like Kipland Ronal Dynamite, I love technology. Notching tubes for bike frames (or roll cages, frames, whatever...) presents a bit of a challenge especially when you don't have a mill or tubing notcher, but thankfully smart people have created programs that will create printed templates allowing you to accurately miter round tubes by hand. As you can see below, the printed template method works quite well, and gives accurate miters after a little work with saws, grinders, and finally a hand file. It seems a little odd, but printers, both 2D and 3D were key for this build. 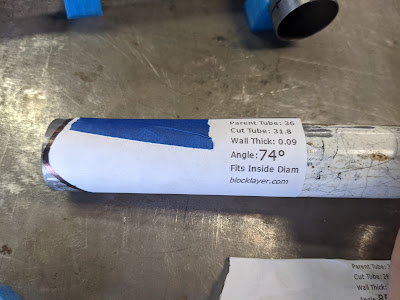 Once I had a method down for mitering tubes and holding them in place, getting the front triangle fit up and welded was actually a pretty easy process. Probably the worst part of it was cleaning the paint off the old tubes, seeing that they were salvaged from an old bike. The welding was done with Joan of Arc, my faithful old MIG welder. Now a real framebuilder would be quick to tell you that frames are only supposed to be TIG welded or brazed together. I'm not a real framebuilder, so MIG is fine by me. I do understand that MIG welding is not ideal, as the heat source and the wire feed are tied together.  In practice this means that the welds start cold and progressively gets hotter as you go. Your weld will likely be too cold to be strong in the beginning, and burn through the tubes at the end. As a work around, I set the heat higher than normal and stitch welded. This seemed to provide decent penetration without burning any holes.

While the front triangle is definitely easier than the rear triangle, by this point I had gotten into a little bit of a rhythm and it didn't feel as hard. To build the rear triangle I did first have to build a jig to hold things in place. Since accuracy was only moderately important for a bike like this, the jig was just two boxes made of plywood which fit tightly around a 2" square steel tube. The boxes each had a section of threaded rod running through them perpendicular to the steel tube. These sections of threaded rod simulated the axles of the front and rear wheels, and were bolted to the front and rear dropouts to set the wheelbase and perpendicularity of the axles. By this point you've no doubt tuned out, so I'll shut up and show more pictures.

Anybody who's welded knows that warpage is the ever present boogeyman, hiding under your bed waiting to devour you if you so much as dangle a toe over the edge of your bed... wait where was I going with this? Right, warpage. You have to be really careful as you weld to ensure you don't instantly turn every joint into a crooked mess. When a hot weld cools, it contracts and shrinks, pulling your part out of alignment. This effect is intensified when the gap being welded is large so accurate fit up is really important, as is a proper tack weld procedure. I think rear triangle of a bike is a particularly tricky thing to weld without warping. It's hard to say if I got it right on this bike since it's a bit small for me to ride, so we'll just have to take the wee man's word for it.

One thing I forgot to mention was the issue of the wheelset. I think I mentioned that 14" wheels are somewhat rare and hard to come by, but trying to find a 14" rear wheel that with a hub accepts a disc brake is pretty much impossible. And then because I want to have the option of converting this bike to a pedal bike if I so desire, I wanted that hub that also had provision for a freewheel sprocket. Such a thing does not exist on the market, so I figured I'd just make my own. After a long search for a hub that had either 16 or 32 holes for spokes, and a brake rotor flange on one side and a freewheel thread on the other, I finally found on on e-bay. The hub was 135 mm wide which is an old standard for mountain bikes, but it feels a little wide for the rear end of a kids bike. Not to worry though, that could be changed too, by removing a spacer, as you'll see below.

The rear brake caliper tab was the final piece before the frame could be considered complete. Real framebuilders would use a custom machined jig to accurately place the brake tab, but I'm not a real framebuilder, so I just mounted the brake rotor, and clamped a caliper on to it and made the tab fit the caliper. 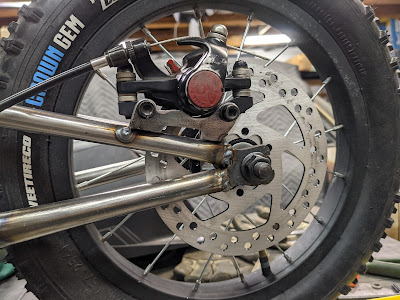 I had some old mechanical disc brakes on hand, but I found that because the throw of the brake lever had to be reduced for small hands, they really couldn't be adjusted to a point where they provided adequate braking when applied while avoiding brake drag when released. They also required a lot of force to overcome the caliper return spring, which is not ideal for a small person's hands. I ended up finding an older hydraulic brake that required only that I shorten the brake hose and re-bleed them. I was really happy with the result. 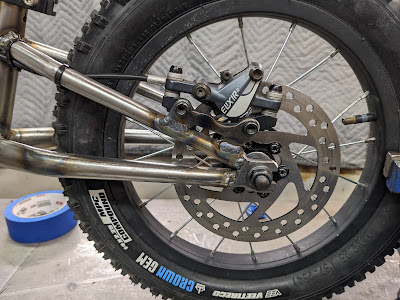 And with that, the frame was done. All that remained was to paint it and put some decals on it. I would have loved to leave it raw, but I figured a three and a half year old wasn't going to be as into the raw look as I am. 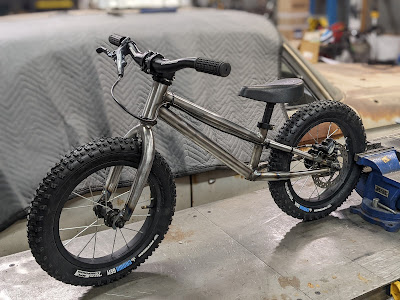 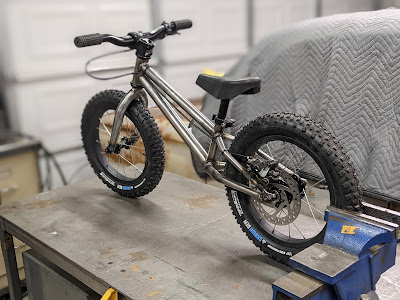 I stripped the bike down, spent a little time sanding and cleaning with acetone before coating it with primer and a dark hunter green, which we'll call British Racing Green. It's been a bit cold here in California (55F, woe is me!!!) So it took a long time for the paint to cure. I even brought it in the house for a couple days. I then enlisted my mother in law to cut out some decals on her Cricut.


My kid is obsessed with a lot of things right now, but one of the longest running obsessions right now is sea turtles. He also loves rhyming and making up words, so Turtle McDurdle is a name which has been heard in this house a few times. I thought it made a fine name for a bike. So, I'd like to introduce McDurdle, a bike who is the reincarnation of several other bikes, used and past their time. My hope is that McDurdle will be a friend that Max remembers and cherishes for years to come, even as he outgrows it and moves on. 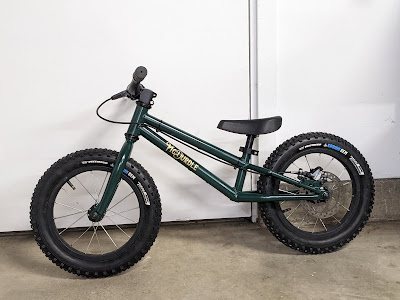 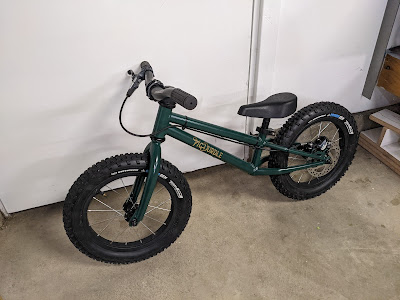 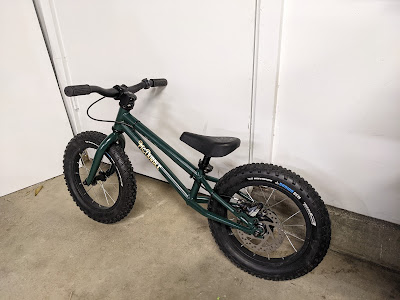 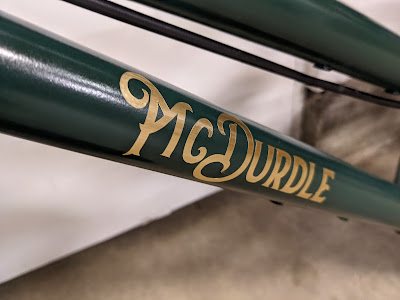 I gave it to him this Christmas morning, and in true kid fashion he kinda just glanced at it and said ok cool, WHERE'S MY NEXT PRESENT??? Of course this was the response I expected, so whatcha gonna do? When the rain lets up and the trails dry out we'll go for a test ride, at that point I think we'll see the appropriate levels of enthusiasm.

And that's it, my first true bike build. It was fun, maybe I'll do it again.